Phoenix ‘Nix’ Knight thought
pulling his club out of the illegal shit his Pops got them into was
difficult.

Until he meets Kadence.

Kadence Turner has no business
lusting over a student’s father, especially the president of the Knights Rebels
MC. Nix is crass, obnoxious and dangerously sexy and for some reason, Kadence
can’t seem to hate him for it. The bossy biker breaks down her defenses, but
unlike the old Kadence, the woman she is today won’t give in without a
fight.

The tension is undeniable, the attraction fierce. A man that wants what he wants
and a woman that will fight him every step of the way.

Let me start off by saying that this book just hit it out of the damn park for me. It had everything I absolutely thrive on when reading: the characters were out of this world dynamic and had personality out the yin yang, the story was extremely well paced and hooked me in from the first word until the very last, and the overall book reminded me of what truly phenomenal books are made of.

Incandescent was an out of this world book that I wish I could give more than 5 stars too. It had it all, and you can bet your butt that I’m a River Savage fan for life after reading this book.

What was off the charts about Incandescent:

Incandescent was an utterly phenomenal book that I seriously enjoyed from beginning to end. This book had it all and more. It was highly engaging, and it is a book I won’t soon be forgetting. From the spectacularly fitting names of the characters, to the OMFG moments that’ll speed your heart rate up, to the moments of pure love and heat you’ll want to bask in, this book will be an unbelievable reading experience for you. Just be prepared for one helluva book hangover from this one.

I also cannot wait to read more from this series and author. (And I’m hoping that next book comes out sooner rather than later! Fingers Crossed!)

Resting the cold beer between my legs to soothe the ache, the boys give me shit for striking out. I feel the same way: the woman is a tough nut to crack.
“You ready for round two, Prez?” Beau smirks behind his beer. Turning my head, I watch as Kadence storms over. I  groan as my broken dick comes to life, apparently not caught up with the news that she doesn’t like him. She stands at the end of the table, arms crossed over her chest, unaware that her position puts her sexy tits up on display.
Fuck, this woman is a tease.
“Hey, sweetheart,” I say before taking a sip of my beer.
“Don’t sweetheart me. What did you say to my date?” she snaps, anger clear on her face, and I’ve never seen a more beautiful look on her. Her eyes blaze with fire and the need to push her more fills me. I can’t wait to have her under me.
“Oh, the stiff?” I ask nonchalantly. “Just told him to run along; he didn’t have what it takes to play with the big boys,” I say as some of the brothers laugh into their drinks.
I’ve never pushed a woman this far before; chasing her and teasing her feels so damn good. Something about her pushes my buttons and leaves me wanting more. Most women fall at my feet begging to get in, but Kadence? No, this woman makes me want to do the begging. I’ve never wanted to fuck a woman so hard while spanking her ass at the same time. The way she reacts to me makes my dick hard and God help me, getting her riled up is a sight to see. I can see it in her eyes; she’s fighting it. She wants me and I intend to give the lady what she wants.
“What do you want, Phoenix?” she demands, uncrossing her arms and assuming a relaxed position, but I’m not stupid. The woman is crazy mad and I’ve got a throbbing dick to prove it.
“What do I want?” I repeat her question, pausing to take another pull on my beer. “Well, after your little stunt in the bathroom, I wanna pull you down on this table and spank your ass,” I tell her calmly. Even though my balls are aching, my cock is pulsing.
“You disgust me,” she hisses and turns to walk away. I grab onto her hand, turning her my way. She tries to pull out of my grasp, but my hold on her is strong.
“You don’t mean that. I’ve seen the way your eyes flash. You would love for me to spank that sexy ass right here for everyone to see. Wouldn’t you?” Embarrassment floods her cheeks, and for a beat, I think I might have pushed her too far.

River  Savage is the author of the soon to be released, Knights Rebels MC Series. The first book Incandescent, will be released on August 11,2014.

With a soft spot for an alpha male and a snarky sassy woman, Kadence and Nix were born.

River would love to hear from you. You can contact her via email at riversavageauthor@gmail.com or follow her via the links below. 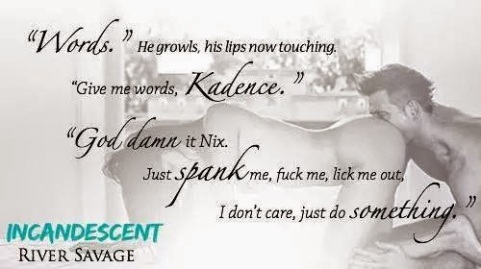 Spending the day drinking all the coffee and catching up with all the book boyfriends. (Peter Kavinsky’s up first! 😍) #bingewatch #livingmybestlife #withallthebookboyfriends #lovestories
Nothing says it’s #oscarnight like an elastic waistband and a hoodie stuffed with gummy bears. This is real glamour y’all, and I am here for it. #oscars2020 #awardshowjunkie #livingmybestlife #allthelivelongday #hotmessexpress
Happy 3rd birthday to the cutest little nugget this world ever did see. I love my Wucas! #HappyBirthdayLucas #pieface #babyshark #cutestlittlenugget
Because when you have the chance to get donuts, you get the damn donuts. 🍩 #itsarule #livingmybestlife #withduckdonuts #livingthedonutlife
Good news y’all, my love of personal growth books (and the F word 😂) is still going strong into 2020. Let’s do this. #keepgrowing #letsdothis #livingmybestlife #withallthebooks #booklove
Pajamas, wine, a charcuterie board I made myself, my bestie, and Netflix. This is New Years Eve at 28 and I ain’t mad about it. Not one little bit. #happynewyear #livingmybestlife #hello2020
It’s time for another episode of “Megan attempting things that are clearly designed for children.” 😂 (Not captured on video is my 5 minute attempt at getting out of the foam zone.) #livingmybestlife #atskyzone #nailedit #winterbreakshenanigans
Master’s degree.....✅ "Did everyone see that? Because I will not be doing it again." 😂 #mastersdegree #graduation #gradschoolisover #livingmybestlife
When in Cleveland...#achristmasstory #youllshootyoureyeout #derangedeasterbunny #leglamp #livingmybestlife #allthelivelongday