Add to your TBR: Goodreads

Three little words are all it takes to rip his world apart. Lost in his own affliction, Sy has been living in a darkness that he doesn’t ever want to let go of.

Until she arrives and shines her light so bright that nothing else mattered.
She was only in it for the chase, for the thrill of capturing the unattainable.
But what happens when her world shatters around her, spiraling her into the darkness beside him?
Can his affliction be her resurrection?
Or will two lost souls living in the depths of deception let it destroy them? 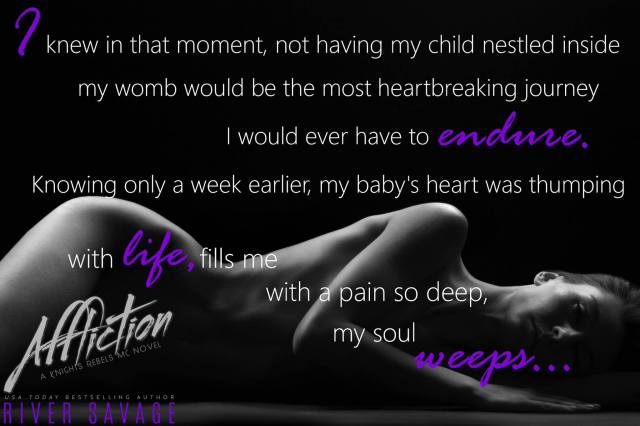 After practically devouring Incandescent by River Savage a few months back, I was more than eager to dive head first into Affliction, the next book in The Rebel Knights MC Series. I cannot tell you how much I loved finding myself back with all the members of the Rebel Knights MC. That is one intriguing, highly engaging, and effing memorable group of guys, and I couldn’t get enough of them. Or their special lady friends.

This series was my first real taste of what an MC book is, and I for one was sold by everything River Savage captured in her incredible debut, Incandescent.

But I’ll let you on in a little secret: Affliction blew me away even more.

I wasn’t prepared for any of it, but I relished in all of it. Every single brilliant piece.

Holly and Sy captured my interest when I first met them both in Incandescent, but they captured my full heart and soul in Affliction.

What was brilliant about Affliction:

Affliction is a story I wasn’t prepared for. I knew I was going to love Holly and Sy’s story from how much I loved them when I first met them in Incandescent. What I wasn’t prepared for was how much these two dynamic characters would make me feel for them as I learned all about them. They dove head first into my heart, and I think they’re going to stick.

Their story isn’t one filled with rainbows and butterflies. It’s messy and visceral and downright emotional and pain filled at times, but that’s what makes it their story. You hit the ground running and you’re not going to stop until it’s all said and done. That’s what sets it apart, and that’s what made me fall head first in love with these two characters and their story that just didn’t quit.

They won’t disappoint you one bit, and in the end you’ll realize, all the darkness was worth that chance of experiencing all brightness of the light.

“What the fuck are you doing in my club?” he asks again, moving his body closer.

“Your club?” I ask, raising my brow. “Last time I checked, I came here with my best friend, not to see you, so if you’ll excuse me,” I say, trying to push off the wall, but he steps right in, his knee coming between my legs.

“You gonna fuck him?” he growls, his eyes growing angrier by the second.

“Maybe,” I tell him, knowing he’s talking about Jesse. “I wonder if he will leave me standing naked after a quick fuck up against the wall,” I continue. His hold on me gets tighter. I know I shouldn’t tease him with my words, but he’s seriously delusional if he thinks he has any claim over me.

“I knew you were a tease, but I didn’t know you wanted to be a club whore,” he replies, and I try not to let his words sting.

“You left me standing there. I didn’t fucking do anything. What are you so angry about?”

“You coming into my club, throwing yourself at one of my brothers.”

“Jeez, get over yourself, Sy. Jesse was just showing me around the place. And if I decide I want to have sex with him, or anyone else for that matter, I’ll do what I want. You don’t fucking own me. You had me, fine, but it was mediocre at best, so keep your hands off me,” I snap, trying to get out of his hold.

“Mediocre?” he repeats back to me. I’m so pissed at his attitude I don’t falter in repeating it.

“Didn’t feel like that when your cunt was gripping my cock like a vice,” he throws back, his words causing my pussy to throb.

“That’s called pelvic floor muscle exercises,” I say, ignoring my body’s response to having him so close.

“Right,” he whispers, leaning further into me, “and what about when I dragged my tongue through that sweet pussy of yours, and lapped up your juices dripping from you?” he questions. It takes everything in me not to respond. “Now that I think about it, when you walked into my shop, all pissed off, you were walking like you had been fucked so hard. Did you feel me for days, sweetheart?” he continues, pushing into me further. “I bet your pussy is aching for me now, isn’t it, Holly?” he asks, his lips so dangerously close to my neck.

Fuck me. Two seconds ago I hated the man, and now I’m trying to squeeze my thighs together to stop the ache coming from my lady parts.

“Too bad you won’t find out,” I counter, staying strong. I might want him more than anything, but he is still an ass.

“I don’t even need to touch you to find out. It’s written all over your face, Holly.”

“You know I’m right. You’re so fucking turned on right now and so frustrated you’re not going to get any relief,” he teases, telling me what I already know.

“There’s always Jesse,” I threaten, trying to get a reaction from him.

“Like fuck,” he spits out, pushing his hard cock against me. “You’re not gonna let that fucker touch you. Do you understand me? None of my brothers will taste your pussy. Do you hear me?” His hand runs up my leg, running along my short denim skirt and finding the outside of my panties. A small gasp leaves my lips at his feather-light touch. “This sweet pussy belongs to me. I fucking had it first. Now, it’s mine.”

“No, it’s not,” I fight back, but my mind is too busy memorizing each lazy stroke of his finger over my lace panties.

“It will be again,” he warns before taking my mouth hard, suppressing me with his tongue. His fingers pull my panties aside, slipping in and dancing over my aching heat.

“Shit,” I breathe against his lips, forgetting where I am for a moment. Forgetting we can’t stand each other.

“You want relief, Holly?” he asks as my hips start to ride the rhythm of his talented fingers.

“Yes, give it to me, Sy,” I plead, feeling myself build with each flick of his finger.

“Say please,” he demands, slipping his thick finger inside of me.

“That’s it, girl. Fuck my finger,” he growls. The heat of his voice causes goose bumps to break out on my skin. A wave of impending bliss washes over me, and then my orgasm hits, hard and fast.

“Sy,” I hiss, but don’t get anything else out as his tongue is dancing with mine again, muffling my shouts of ecstasy. His taste reminds me of beer, mint, and all things Sy. He latches onto my tongue, sucking it hard into his mouth, sending pleasure and pain rolling through my body.

Fuck, this man is dangerous with his bad-boy attitude, his sexy as hell dirty mouth and his ability to take me on the highest of highs in less than a minute. He slows the kiss, lingering for a moment before resting his forehead on mine. This right here is why this man is dangerous: bringing me apart in the middle of the club, and making me forget I hate him. Removing his fingers, he brings them to his mouth and sucks them clean.

Amazon US  /  Amazon CA
Amazon AU  /  Amazon UK
B&N  /  Kobo  /  iBooks
Synopsis
Phoenix ‘Nix’ Knight thought pulling his club out of the illegal shit his Pops got them into was difficult.
Until he meets Kadence.
Kadence Turner has no business lusting over a student’s father, especially the president of the Knights Rebels MC. Nix is crass, obnoxious and dangerously sexy and for some reason, Kadence can’t seem to hate him for it. The bossy biker breaks down her defenses, but unlike the old Kadence, the woman she is today won’t give in without a fight.
The tension is undeniable, the attraction fierce. A man that wants what he wants and a woman that will fight him every step of the way. 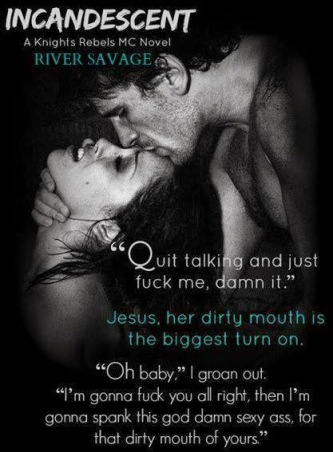 Click below to enter the giveaway!
a Rafflecopter giveaway