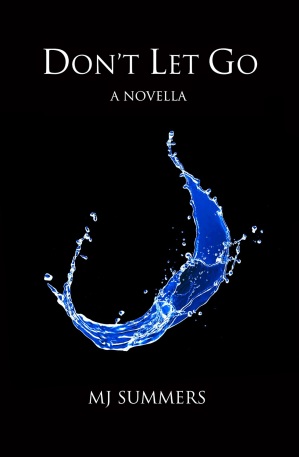 M.J. has been working on a little something sweet and savory for you while you wait for Breaking Love to be released…
Readers fell in love with Ben and Alicia’s picture-perfect marriage in BREAK IN TWO, but, for these two, the road to a happy ending hasn’t always been smooth.
Alicia Williams has been in love with Ben Mitchell since he picked her up out of the mud in elementary school. But baseball-obsessed Ben has dreams to make it to the majors and see the world, and those dreams don’t include the girl next door, no matter how perfect she is. Ben is forced to choose and he leaves Alicia behind – but dreams can change and regrets can grow. When Ben returns back home to the ranch in Colorado Springs, trying to re-discover the man he was meant to be, will the girl he can’t get off his mind still be waiting?
Join Ben and Alicia in DON’T LET GO as they fall in love and discover that sometimes life’s greatest adventure is the one you find at home.

“Ahead by a Century” by The Tragically Hip

“Over You” by Miranda Lambert

“The Lightning Strike” by Snow Patrol

“Weather to Fly” by Elbow

“How about you and me pretend we are the only two people on this island and we’re staying for a good long time?” Ben nuzzled her neck for a moment and then found her earlobe with his lips, savouring it.
“Why, Ben,” Alicia said coyly, “if there is no one else on this island, that means we can do anything we like, anywhere we like . . .”
“Exactly,” Ben replied in a low, sexy tone as he slid his hand in between her thighs. Finding the high slit in her skirt, he ran his large hand along the silk of her legs, wasting no time in getting to her bikini bottoms. He toyed with the strings resting on her hips. One little tug and they would fall away from her, leaving her exposed under her skirt. Trailing kisses down her neck to her collarbone, he pulled at the strings. “I’ve been waiting to do that all day,” he murmured in her ear.
Alicia gasped a little at the thought of being so exposed to the world before she realized that they really were alone. She allowed herself to enjoy the hot breeze as it caressed her sensitive skin. “That’s kind of why I bought it.”
Ben’s fingers moved along the length of her sex, taking in its satin warmth. Alicia gave a little moan and turned to find his mouth with hers, feeling her body respond as it always did to Ben’s touch. After years of his kisses, she never stopped getting that thrill from feeling his lips on her. He kissed her the way he looked at her, as though she were the only woman to have ever inhabited the planet.
Sliding his fingertips gently into her, pressing his palm against her, rubbing with exactly the amount of pressure that he knew she loved, Ben knew every inch of her body, how she wanted to be touched, what she needed, and he took full advantage of that knowledge as he moved his other hand up over her breasts. Moving his fingers in tiny circles inside her, he could feel her press herself hungrily against his hand. It wasn’t long before they reached that exquisite moment when she tensed in long waves as commanding as those in the ocean nearby. Alicia bit down on her lip to stifle the loud cry that begged to erupt from her throat. Ben’s own breathing become ragged and his entire body hardened at the desire that was building up in him. He wanted her right there on that beach and he was going to have her.

This novella looks so good y’all, so be sure to 1-click this baby today!