The New York Times bestselling author of Slow Burn turns up the heat when a sexy bet turns into so much more….

Hawkin Play, the bad boy rock star with a good guy heart, has lived a lifetime of cleaning up after his twin brother’s mistakes. Hunter’s most recent screwup could land Hawke in jail and risk the band’s future. Hawke agrees to guest lecture at a local college to stay in the judge’s good graces—and a bet with his bandmate to seduce his sexy teaching assistant is icing on the cake.

Quinlan Westin is harder to bed than Hawke imagined. She knows his type and is determined to avoid the rocker at all costs—even if their attraction runs deeper than simple lust.

Just as Hawke might finally be winning over the girl, his brother has other plans. When Hunter realizes his twin finally has a weakness, he’ll stop at nothing to take advantage….

I walk toward him, the sight of him slightly unkempt with a carefree smile he hasn’t possessed for days calls to my libido on so many levels it’s ridiculous. He brings a shot of something to his mouth and I don’t even give a second thought to what it is because I know I’ll taste it on my lips momentarily.

He hums deep in his throat when I step up into his body and there is something so inherently sexy about the sound—knowing that I caused that reaction—that together with the feel of his firm body against mine lets me know there will be no interruptions this time.

He looks at me, eyes darkening and one hand sliding beneath my shirt a beat before our lips meet in a hungry, no-holds-barred kiss. His empty bottle clatters on the counter behind him so that his other hand can join in the temptation. I lose myself in the taste of the tequila on his tongue, and the hypnotizing feeling of his hands on my body.

The music thumps hard around us, the noise buzzes, and the faint scent of cigarette smoke wafts in from outside but it’s as if none of it hits me because I’m consumed by everything about him: his taste, his cologne, the groan I can’t hear but can feel against our connected chests, the heat of his body. I don’t care who’s watching because it’s almost as if the overwhelming emotions that he’s experienced all week long are manifesting themselves into our mutual desperation.

“Upstairs. Now,” he murmurs against my lips, and I’ve never heard more perfect words. He grasps the bottle of tequila behind him in one hand and my hand in the other without saying anything further and walks with purpose through the crowd. I can’t see his face but he must have a determined look on it because not one person stops him to talk when that’s been the norm for the evening thus far. At the bottom of the stairs, I catch the eyes of the three wannabe women and just smirk. Call me bitchy, but I can’t help it, I’m with the one they were hoping to land tonight. 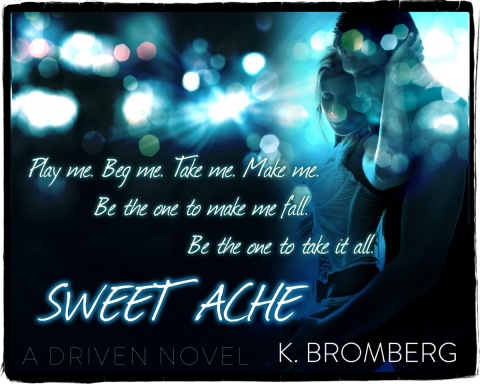 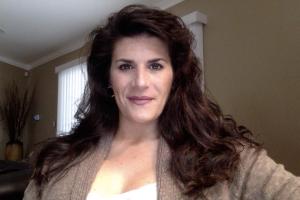 New York Times and USA Today Bestselling author K. Bromberg is that reserved woman sitting in the corner who has you all fooled about the wild child inside of her—the one she lets out every time her fingertips touch the computer keyboard.

K. lives in Southern California with her husband and three children. When she needs a break from the daily chaos of her life, you can most likely find her on the treadmill or with Kindle in hand, devouring the pages of a good, saucy book.

On a whim, K. Bromberg decided to try her hand at this writing thing. Her debut novels, Driven, Fueled, and Crashed of The Driven Trilogy were well received and went on to become multi-platform bestsellers as well as landing on the New York Times and USA Today lists. Her other works include a short story, UnRaveled, and a companion piece to The Driven Trilogy titled Raced. She is currently working on three stand alone Driven novels, Slow Burn, Sweet Ache, and Hard Beat. She also plans to release a novel addressing the 10 year gap at the ending of Crashed in late fall 2015

One thought on “Releasing Now: Sweet Ache by K. Bromberg”