He bites his bottom lip and grimaces. “Fuck!” He growls out to the trees above him and then rolls his shoulders to dissipate some of the stress I see settling there. “Semantics aren’t an excuse. An omission is the same as lying Haddie, but you’re missing the point entirely. It’s not whether it was a lie or not. It’s so damn far from that. It’s you using the sex we’ve had to numb yourself when it should do the exact opposite. It should light your body on fire and burrow so deep under your skin that all you think about is the next time you can have me…because fuck if that’s not what you’ve done to me. So I call your bluff. I’ll keep calling it every fucking day until you admit you want me, that being with me does that to you too…but you won’t will you?” I just remain still, face impassive, body raging with emotion beneath the surface. “You’d rather stand there and tell me you prefer the numb, the void, the nothing, than admit you need me.”

His eyes have their own language as we stare at each other, the power of his words bringing tears to my eyes and knocking the words from my lips. “I was just doing what I thought was best, protecting everyone from more hurt, more everything.” And I hate the numb, I scream silently. I hate it so fucking much that every time we touch you make me feel so alive I realize how dead I’ve felt inside over the past year.

I don’t know why I don’t tell him the rest. Like if I do then I’m just sealing my fate by Murphy’s fucking Law so I keep quiet.

“Really? That’s all you’ve got for me? Next time make sure your eyes and your lips match up City because you’re just adding insult to injury right now. Your refusal to answer is infuriating. Need me Haddie. Use me as your goddamn emotional punching bag or your real one for that matter but fucking need me. I’m not some schmuck who’s going to bolt at the first rough patch and the fact that you still don’t see that is a crock.” He blows out a loud breath, jaw clenched, anger palpable. “I’m so fucking pissed but I’m also so fucking mesmerized by you right now and I don’t know what the hell to do or say. All I know is that protecting someone from the truth is just another way of shutting them out.” 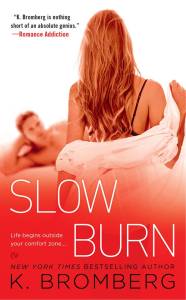 ONE NIGHT. THAT’S ALL IT WAS SUPPOSED TO BE.

Reeling from the sudden loss of her sister, Haddie Montgomery has sworn off relationships. All she wanted from Beckett Daniels was a sexy distraction to help her escape her pain for just a little while….There weren’t supposed to be any strings attached—so why can’t she shake the memory of that unforgettable night from her thoughts? Or the taste of his kiss from her lips?

No matter how hard Haddie tries to forget about him, Becks relentlessly tries to prove that she should start living for today. But she is determined to avoid romantic commitment, and she can always use her ex-boyfriend’s reappearance to help snuff out the slow burn within her that Becks has sparked….

Or will fate force her to realize that this kind of connection doesn’t come along very often and a chance at love is worth the risk?

New York Times and USA Today Bestselling author K. Bromberg is that reserved woman sitting in the corner who has you all fooled about the wild child inside of her—the one she lets out every time her fingertips touch the computer keyboard.

K. lives in Southern California with her husband and three children. When she needs a break from the daily chaos of her life, you can most likely find her on the treadmill or with Kindle in hand, devouring the pages of a good, saucy book.

On a whim, K. Bromberg decided to try her hand at this writing thing. Her debut novels, Driven, Fueled, and Crashed of The Driven Trilogy were well received and went on to become multi-platform bestsellers as well as landing on the New York Times and USA Today lists. Her other works include a short story, UnRaveled, and a companion piece to The Driven Trilogy titled Raced. She is currently working on three stand alone Driven novels, Slow Burn, Sweet Ache, and Hard Beat. She also plans to release a novel addressing the 10 year gap at the ending of Crashed in late fall 2015

When the local winery offers wine slushees and lots of beautiful space to social distance, you run yourself there as soon as humanly possible. Today was a good day. 💜#livingmybestlife #allthelivelongday #wineslusheesaturday
Year 29 is starting off with tacos, donuts, and some social distancing. (I didn’t have the numbers to put 29 on my donut, so I decided to use all of the numbers I had left.😂) Here’s to another year of living my best life! (And hopefully a little less quarantining.) Thank you everyone for the birthday wishes and love today. Y’all have all made this the best day a girl could ask for. #livingmybestlife #allthelivelongday #hello29
My book tree has been up for over 5 glorious months y’all. 87% of why it’s stayed up so long is because I LOVE it so dang much, the other 13% is because I was just being lazy AF....but it’s officially coming down today. 😭 I’m a little sad about it, but I also really want one of those books in the middle of the tree 😂, plus I’ve run out of excuses to keep it up, so it’s time. So long glorious book tree, see ya in December you beautiful thing. #booklove #quarantinechronicles #booktree #bookbuyingaddict #timetosaygoodbye
Did you know that today is World Autism Awareness Day?! Well now you do, so let’s light it up blue! 💙😉 I have the amazing opportunity to work with, know, and love some amazing tiny humans with Autism. I am missing them (and all of my tiny humans) something fierce today, but I have no doubt they are all continuing to be their incredible selves! And I just feel lucky to be a part of their exceptionally beautiful spectrum. 💙 #shouttheirworth #autismawareness #proudspecialeducator #inclusionisthenewcool #differentisthenewnormal
I was let out of the house, for the first time in 6 days, to get more quarantine snacks. (Someone in our house (🙋🏻‍♀️) keeps eating all the good stuff, and I needed more emergency salsa.) This is what my cart had in it by the time I left Target....who in the world let’s me be an adult?! 😂#quarantinechronicles #ieatwhatthekidseat #livingmybestlife #withalltheartificialsugar #snacktime
💙💛Happy World Down syndrome Day! 💛💙 Today I’m rocking these crazy fun socks for my amazing tiny humans and humans all over world rocking that extra chromosome! If you have had the privilege to know and love someone with Down syndrome, then you are one lucky person. I am missing my tiny humans something fierce during this quarantine (and counting down the days until we can be together again!), but I will always celebrate them and their literal amazingness!! Today I took the #321pledge to help support the higher education dreams of men and women with Down syndrome. @rubysrainbow is an incredible organization that grants these dreams and scholarships, and I love supporting them and all the phenomenal things they do! Here is my link if you’d also like to take the #321pledge https://321pledge.org/share/megan-cooke (Special shoutout to my golden girl Cameron for waking up from her 10th nap for the day for this picture.) #rockyoursocks #worlddownsyndromeday #proudspecialeducator
Saturdays are for eating all the pizza. #bottomsup #livingmybestlife #allthelivelongday #rva
I ordered the largest coffee with extra shots of espresso...which means it’s time to kill these beta notes. 🙌🏻 #betareadersinthewild #coffeepower #livingmybestlife #31korbust #seeyaontheflipside
Spending the day drinking all the coffee and catching up with all the book boyfriends. (Peter Kavinsky’s up first! 😍) #bingewatch #livingmybestlife #withallthebookboyfriends #lovestories