in the Hope Town Series by Harper Sloan!

Have you ever felt like you were living your life for a future that was predetermined? Like there was some bigger picture you just prayed you would someday see clearly? That picture has been crystal clear to me since I was old enough to recognize it for just what it was.

Or I should say recognize him for who he was.

My name is Danielle Reid, and it’s time for me to get my man.

Our future is an unexpected fate, and no matter what our parents, siblings, and friends say…it’s going to be worth every second of the fight to make it happen.

Cohen Cage was probably my favorite character from Harper Sloan’s Corps Security Series, behind Maddox Locke of course. The moment I met his spunky little 4 year old self in Cage, I adored him. He had vibrant personality out the yin yang, so it was no surprise at all that I could not wait to get my hands on his book.

I had no doubt going into this that I was going to be captivated by him and his story now that he was all grown up. (And boy has he grown up, by the way!)

What I didn’t know was that I was going to be just as enraptured by one Dani Reid. That girl is the epitome of what a strong independent female character looks and acts like, and I was just blown away by her character.

Unexpected Fate tells Dani and Cohen’s heart racing story. They’ve known each other their entire lives and their relationship together has changed and evolved over the years, but the events of Unexpected Fate are forcing them to face some hard and heated truths about what they share. Or what they hope to share.

Their story is passionate, and heart pulling, and feeling as all get out, and it will have you enamored by the amazingness that is Cohen and Dani the instant you start it.

What I loved about Unexpected Fate:

This book is all about the unexpected, fate, love, pain, and every little thing that comes in between. It explores so much, and gives you so much amazingness. Dani and Cohen’s relationship and their attempt at seeing where things could go is nothing short of wonderful, and you are going to love all the moments they give you.

There are moments that’ll make you blush, and others that will have you bursting with what you’re reading. Some moments will try to break your heart, while others will attempt to seal those cracks. There are plenty of moments that will have you laughing at the humor and personality of this book and its characters. It all just balances flawlessly and gives you the whole dang package.

Unexpected Fate will take you on one helluva journey that will lead you and them to some pretty unexpected places, but I am promising you that you will love every second you get to spend in this superb book with them.

I for one am sold on this new series, and I cannot wait to see what’s next for the exceptional group of characters brought to life in this utterly outstanding book, this phenomenal series, and this unforgettable world. 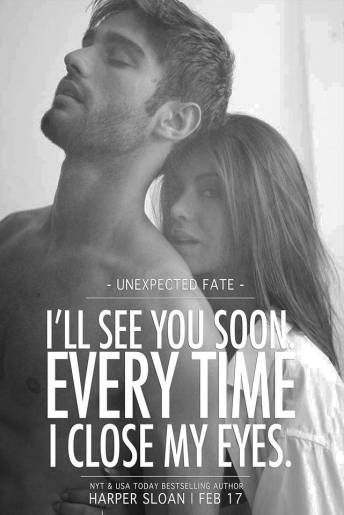 “Dani-girl.” His voice, that rich rumble of masculine excellence, washes over me and I shiver again before cursing under my breath. The rumble of his low laughter tells me that he definitely didn’t miss that little move.

“Hey, Coh,” I say with a smile. “What brings you in? Last minute, I might add.” I pat the chair before walking around and holding the back while he sits down.

When his scent hits my nose, I almost come on the spot. Lord, he smells good. I wonder what he would smell like while his body covered mine, all sweaty from hours of good lovemaking. I run my fingers through the longer lengths on the top and feel my cheeks heat slightly, thinking about doing the same when his face is buried between my legs.

Shit. I missed what he said because, naturally, I was thinking about him naked. Naked and thrusting into my body. Naked and feasting between my spread thighs.

“You feeling okay? I thought Nate said you were better?”

He’s silent, so I take that as a sign that it’s safe to bring my attention back to him.

Big mistake there. His knowing eyes are boring right into mine. The chocolate depths sparkling in a way that makes it clear he has a good idea about where my mind was going.

“Did you hear what I said, Dani-girl?”

“Of course I did, Cohen. What, did you think I was standing here daydreaming?” I joke.

“Well, yeah, that’s exactly what I think.” His eyes darken and he smirks a devilish grin. “Did you know you talk in your sleep, Dani?” he asks, and I drop my comb.

“Dani, you do. So, yeah, I do think you were standing there daydreaming. Want to know why?” He uses his booted foot to move his chair so that he’s facing me, and then he leans in so that his face is dangerously close to mine. Even when he’s seated, his head is almost level with my own. Curse my horizontally challenged self. “While you were zoning off into space with your fingers running through my hair, you had this smile on your lips. The same smile you had the other day when you were dreaming. About me, Dani. And don’t deny it, because you don’t moan my name if you’re dreaming about another man. Yes, Dani, you very much do talk in your sleep.” He smiles again before leaning back and looking down to his phone. “Clean up my neck please, cut the length off the top, and give me a buzz on the sides. Other than that, you’re clear to continue with your thoughts.”

I must have been standing there like an idiot because he looks up from his phone, laughs to himself, and, with one tan hand, reaches out and pushes my mouth closed.

“You’re going to catch flies that way, Dani-girl. One day, maybe you can clue me in on what those dreams are about.”

Drives me insane, the control he has over me. There isn’t a single person in the world, other than Cohen, who can turn me into a ridiculously stupid, sputtering fool. My normal confidence disappears. And clearly, he isn’t as oblivious to my feelings as I originally thought.

How in the hell am I supposed to handle this?

Wait a minute. Cohen or not, I’m not going to let him pull my strings when I know he is just doing this to make me feel uncomfortable.

So, time to call his bluff.

“Why? You planning on doing something about it?”

He looks up sharply, clearly not having expected me to actually say something in return since he was going for shock value.

“Try me,” he demands, his voice thick and even deeper than normal.

I throw my head back and reach out to run my fingers thought his hair again, just barely suppressing the shivers. Curling my fingers slightly so that I can grab a good hold, I lean in and pull his head back at the same time. With my nose just a hair away from his and our breaths mingling together, I say, “Cohen, you couldn’t handle the truth of my thoughts when it comes to you and we both know it. So how about you let me know when you’re ready for me to clue you in.” I give his hair a light tug and smile when he swallows loudly and shifts in his seat. “Ready for that trim?” I ask with a wink, and I’m rewarded with his groan.

I have no idea how I do it, but I manage to get through his cut without coming unglued. I can see Lyn trying to get my attention from across the room. Stella had to leave after she overheard my words to Cohen because her giggles were getting the best of her. Cohen has remained silent the whole time. His eyes though… They’re speaking louder than his words ever could.

They haven’t left my reflection in the mirror since I started. I can feel them every time I shift. When I stopped to go grab another comb after I dropped my fourth one, I felt his gaze follow me across the room to Stella’s station. The few times I stopped cutting to meet his eyes, the heated promise written all over his face almost did me in. I almost just said ‘fuck it’ and climbed on his lap to have a go regardless of the people watching our every move.

I finish the last buzz of my clippers around his right ear and move to brush all the stray hair off. “All done,” I say softly and unclip his cape.

He stands, shoving his phone in the back pocket of his jeans, and walks over to stand in front of me. I continue to pretend I’m busy with the cape I just removed, brushing stray hairs off here and there, when his hand comes up, his finger and thumb hitting my chin, and my face is lifted until I have no choice but to look in his eyes.

“Do not tease me, Dani. It’s not a game you want to play if you don’t intend to follow through.”

“You did, and I have no doubt you’ll have the brilliant idea to do it again. The next time you allude to those dirty thoughts I know you have about me, don’t think for a second that I won’t drag you to the closest bed to show you just how fucking dirty they’ll get.” He leans close, his scent hitting my nostrils, and I involuntarily inhale deeply, earning me a rumbled chuckle. “What you don’t know, Dani—because contrary to what you think, you don’t know me well enough to assume what having me would really be like. But I promise you this: every little thought that you have had that causes you to moan my name while scissoring those perfect legs back and forth, praying for completion—it would be so much hotter than you could ever imagine.” He gives me a soft, sweet kiss against my temple that has fire racing from that spot all over my body until it ends in the awareness that I’m pretty sure I just came in my pants.

Harper lives in small town Georgia just a short drive from her hometown of Peachtree City. She (and her 3 daughters) enjoy ruling the house they dubbed ‘Estrogen Ocean’, much to her husband’s chagrin. Harper has a borderline unhealthy obsession with books; you can almost ALWAYS find her with her eReader attached. She enjoys bad reality TV and cheesy romantic flicks. Her favorite kind of hero–the super alpha kind!

Harper started using writing as a way to unwind when the house went to sleep at night; and with a house full of crazy it was the perfect way to just relax. It didn’t take long before a head full of very demanding alphas would stop at nothing to have their story told.