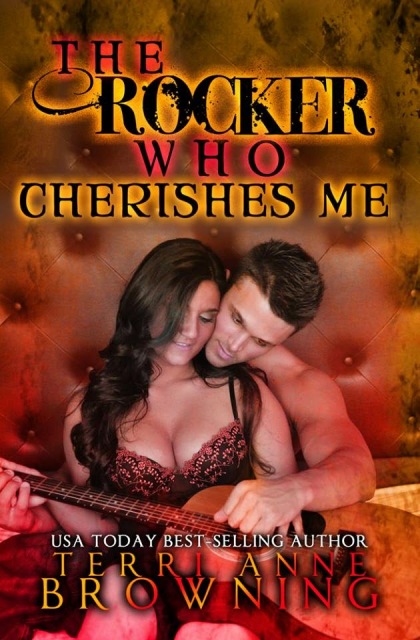 The Rocker Who Cherishes Me

The marines took me from a Tennessee
farm boy and turned me into a hard man. Between the things I’d seen during my
tour of duty and the things I’d done during my years as a member of OtherWorld,
nothing could faze me. Nothing.
Except for HER.
She’s everything that is good in the
world. At least, my world. Everything I’ve ever done has been for her. Always
for her. I feel as if I need her to breathe, to feel alive. But I can’t have
Marissa. She’s to innocent, to damn perfect. And me? I’m not good enough for
that girl. She deserves better, someone who would spend their life CHERISHING
her. Not breaking her heart.
Marissa

Between my brother and Wroth Niall I’d
been protected from the world for most of my life. You would think I was still
a little girl the way they treated me. But I wasn’t made out of glass. It would
take a lot to break this girl. Because if a childhood cancer hadn’t kicked my
butt, nothing would. Right?

All I’ve ever wanted was for him to
look at me. Really look at me and see that I wasn’t a fragile piece of
porcelain that would break if he touched me. What I got was a lot more…but
nowhere close to enough. Once I touched heaven—at least heaven for me—and now I
didn’t know how to go back to what Wroth and I had had before. I can’t go back
to the life I was living before my short time with Wroth. It would destroy me
to stay that close, when I know that I’m not what he really wants. So when my
brother asks me to go on tour with him yet again, I decide to jump on that tour
bus without a backwards glance.
Only I wasn’t prepared to be stuck on
HIS bus. 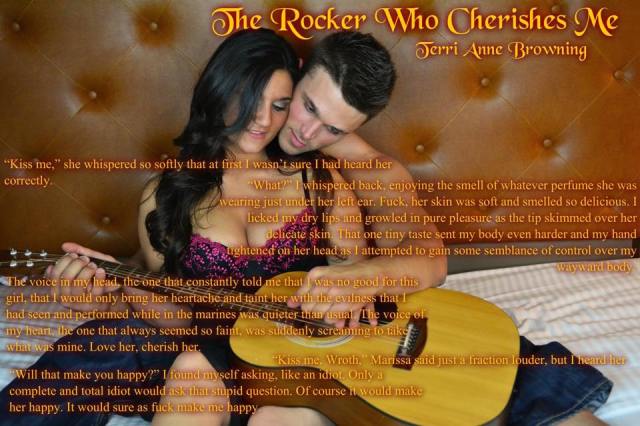 Wroth
(Unedited. Subjected to Changes – Mature Language)
She was out on the dance floor with a glass of something fruity in one hand and
her other hand wrapped around Rhett’s arm as she danced between him, Natalie
and Linc. I slammed my now empty bottle of beer down onto the bar top, making
Emmie who had been standing close by jump. But I didn’t think to apologize. My
mind was cloudy but focused on only one mission.

“Fuck, why am I the only sober one when he is suddenly shit faced?” I thought I
heard Axton whine behind me.

Was I shitfaced? Maybe, but I didn’t care.

As I strode toward my girl someone stepped in front of me, but I pushed past
him, not caring if I knocked the man on his ass or not. As I drew closer
Natalie and Linc stopped dancing and Natalie took a few steps back, pulling
Linc with her. After a small hesitation she reached for Rhett and tugged him
back with her and the muscle head. Marissa, oblivious to her friends’ desertion
and my approach continued to sway to the soft music with her eyes nearly
closed.

My buzzed mind decided to take advantage of her like that and I wrapped my arms
around her from behind. My hands folded around her waist and I lowered my head
even as she stiffened in my arms. Burying my nose in her neck I inhaled like a
man deprived of oxygen would take in lungful after lungful of fresh air. Dallas
had been right earlier. Marissa’s shampoo did smell good. It was something
different from what she had once used, but it smelled delicious and made her
hair soft and shiny.

Marissa tried to turn in my arms but I tightened my hold around her waist,
locking her in place against me. As if it had developed a mind of its own, my
tongue snuck out and tasted the soft skin under her ear, rewarding me instantly
with a shiver that she was unable to contain. Around us everyone else
disappeared and I swayed to the music with her. I didn’t dance, but if it meant
I got to have her in my arms then I would do the fucking Macarena

A NOTE FROM TERRI:
Having had a passion for reading from the time my aunt first
handed me my first romance, I slowly grew bored with just reading. I wanted to
control the characters, make them into who I wanted them to be and that way I
was never disappointed with the endings. I soon learned that it isn’t always
that easy. The characters control the author. But that is all part of the fun
when creating a new story. Seeing where these people take you on their journey
to find their soul-mate has become my new passion and getting to incorporate my
love of music–Rock music in particular–has been a dream come true. Thanks for
taking this crazy ride with me, and I can’t wait to see where we go next!
MEDIA LINKS: