Felicity Bolton finally feels like she has moved on with her life. She misses her friends and family back in Creswell Springs, but now she has new friends—a new family. She has found the peace that she lost the night she lost her unborn child. She would do anything to protect her newfound family, even if that meant facing the devil himself.

The minute Jet Hannigan walks back into her life that’s exactly what she has to do.

Jet Hannigan is officially a free man. With his parole lifted he can finally do what he’s been aching to do, go after the only woman who will ever own his heart. He’s known where she is for months and has been impatiently waiting for the day he could reclaim her. What he wasn’t excepting was to have to pull out the big guns and blackmail her into returning to Creswell Springs with him. With everything going on with Flick’s boss, and the media circus surrounding the chaos, Jet thought the safest place for her was home where he and his brothers could protect her.

Instead he brings her home to a war zone. 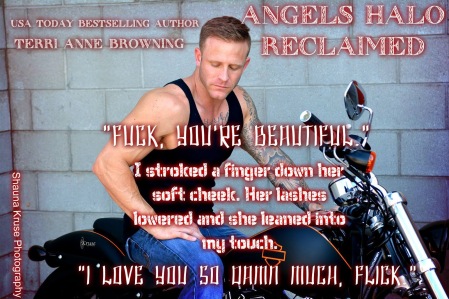 It is no secret that Terri Anne Browning is one of my automatic one click authors. I have loved each and every book I have read by her. She never fails to deliver a book that weaves together wonderfully dynamic characters, a fast paced story that never quits, and an overall outstanding reading experience that leaves me completely fulfilled and so excited for more at the same time. She first hooked me in with her Rocker Series, and she continues to hook me in even further with The Angel’s Halo Series. I truly can’t get enough of her books.

Terri Anne Browning always gives me the right amount of everything in her books, and Angel’s Halo: Reclaimed was no different. This book was well-paced, action packed, and intense to say the least. It gave me a well thought out story that gave me so much of what I love about these characters, while also giving me one helluva second chance love story jam packed with emotions and feels that had my heart so invested in what I was reading.

I got it all in this book with these characters. I got the action, the grit, the intensity, the feels and emotions, all the meltworthy moments and the moments that tugged at my heart again and again. I got all of that and everything in between, and I loved every bit of it because it just worked. Flick and Jet’s story was one that I needed and craved for so long, and it truly delivered in more ways than one.

This book was a fantastic addition to this series, and I was thrilled to be back in Creswell Springs with the Angel’s Halo MC. If you haven’t read the other books in this series, then you really need to before reading this one to really get the full impact. (Plus those books are equally as outstanding as this one!) The world of this book is unique in the most fantastic way, and it never fails to send my heart racing in the most memorable way. Getting back with all these characters as I finally got Flick and Jet’s story was nothing short of wonderful, and I truly couldn’t have asked for anything more from this book.

What I absolutely loved about Angel’s Halo: Reclaimed:

Angel’s Halo: Reclaimed reaffirmed once again why Terri Anne Browning is one of my go to author’s, and why I can’t get enough of her books, her unforgettable characters, and the mesmerizing, all-feeling, and seriously consuming stories they all give me. This book not only gave me a story that I’ve been wanting for years, it gave more of what I was already head over heels in love with from this series. It was gripping, filled with passion, emotion, heat, and some serious feeling, and it packed a mesmerizing and breathtakingly emotional second chance love story I couldn’t get enough of.

Jet and Flick’s story truly gave me it all. It allowed me to fall in love with their characters all over again, while understanding their shared pasts and presents. All throughout this book I was falling so hard under the two of them as they explored their second chance and all that came with it. The more I read, the more I needed these two to be together, and the more I needed it to all be okay for them. Their story isn’t easy, but it’s so worth it. It’s emotional and will squeeze your heart more times than you can count, but through it all you will know that what these two share is extraordinary and so worth fighting for.

This was an overall outstanding addition to this series, and I am already looking forward to what’s to come in this series for all these characters. I need more Hannigan’s in my life, and I have no doubt that Terri Anne Browning will continue this series in a way that will make me love it all even more. This was a true must read, and this series is not to be missed!

Terri Anne Browning is the USA TODAY bestselling author of The Rocker…Series. She started writing her own novellas at the age of sixteen, forcing her sister to be her one woman fan club. Now she has a few more fans and a lot more passion for writing. Reese: A Safe Haven Novella was her first Indie published book. The Rocker That Holds Me changed the tables and kicked off The Rocker… series featuring the sinfully delicious members of Demon’s Wings. The Rocker… Series has since expanded to OtherWorld with Axton Cage and his band members. Terri Anne lives in Virginia with her husband, their three children, and a loveable Olde English Bulldog named Link.