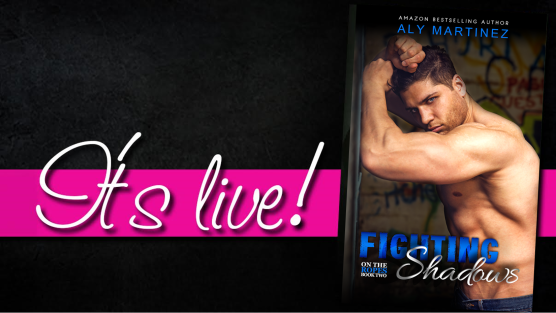 **Each book in the series can be read as a standalone** 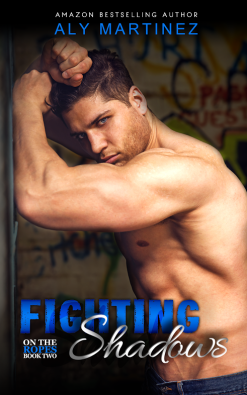 I come from a family of fighters. I always thought I’d follow in their shadows, becoming unstoppable in the ring. That changed the day I saved the life of a woman I loved, but could never have.

My brother hailed me as a hero, and my reward was a wheelchair.

Until I met her.

Ash Mabie had a heart-stopping smile and a laugh that numbed the rage and resentment brewing inside of me. She showed me that even the darkest night still had stars, and it didn’t matter one bit that you had to lie in the weeds to see them.

I was a jaded asshole who fell for a girl with a knack for running away. I couldn’t even walk but I would have spent a lifetime chasing her.

Now, I’m on the ropes during the toughest battles of my life.

Fighting the shadows of our past.

Fighting to reclaim my future. 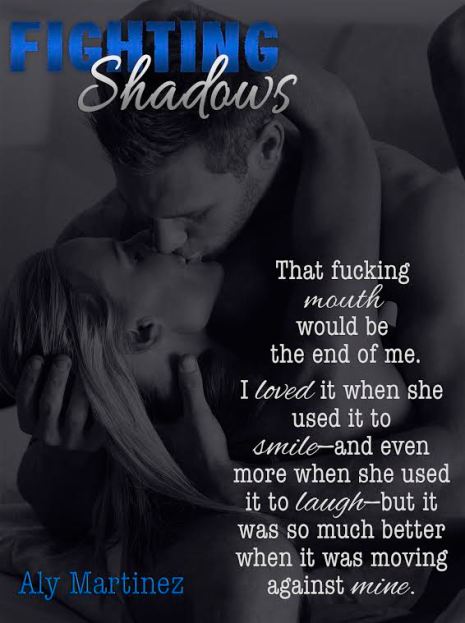 Every time I sit down to read a new book by Aly Martinez, I know that I am going to be reading a story that will give me everything. I know I’ll get extraordinary characters I’ll love fiercely, a story that gives and gives and then gives some more, and that I’m going to be feeling every ounce of that amazingly crafted book whole heartedly.

I got all of that and more while reading Fighting Shadows, the second book in her On The Ropes Series.

The instant I started it I knew I was going to love this story. After practically devouring Fighting Silence, I knew that this book would likely win me over in a nanosecond, and boy was I right on that one. Fighting Shadows was phenomenally intense, enrapturing as all get out, with so much outstanding emotion and feeling weaving its way breathtakingly throughout the pages of this book.

When I was reading Fighting Shadows, I wanted to fist pump in the air while simultaneously happy dancing because of what it allowed me to experience with its characters while I was reading. Even when it tried to rip my heart out because of what these characters were going through, I still wanted to happy dance and fist pump because I was so unbelievably connected to what they were going through. That was all possible because of how superbly Aly Martinez wrote and created this book, and Ash and Flint’s characters.

Fighting Shadows tells the story of Flint Page and Ash Mabie, two dynamic characters with some serious pasts and one serious connection, and it follows them both as they explore the ups and downs and turn arounds that their immense feelings bring. This book stole my heart the minute I began reading it. It had it all, and it was all nothing short of wonderful.

What was utterly fantastic about Fighting Shadows:

This is a book that stays with you in some way, shape, or form. It stays with you, it makes you feel every magnificently and thoughtfully crafted thing, and it gives you two characters who will permanently own a piece of your heart.

That piece is bursting with the perfect amount of humor, charm and ridiculousness, so much raw vulnerability and authenticity, and more glorious fight and stubbornness than you can shake a stick at. That piece is wholly unique, definitely different in the best kind of way, and vibrant as all get out because that’s what this book is. That’s what these characters are, and that’s what reading and experiencing Fighting Shadows is like.

Something also tells me that the piece of my heart that Flint Page and Ash Mabie now forever own is filled with stars and weeds and newsies and neon green converses. It’s a place where dreams go on for days, and where Eye of the Tiger plays on full blast all day long.

That is one distinctive and beautifully vibrant piece that I will always love fiercely. Once you read this unforgettable book, I think you’ll agree that that piece of your heart that these characters and their story now own is something you’ll always treasure, and will truly never want to let go of. Ever. 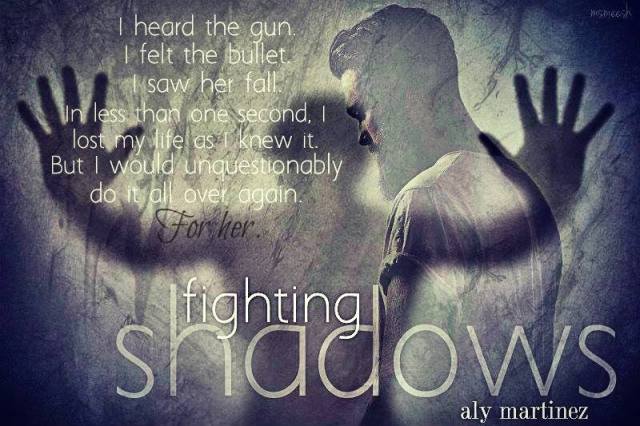 “Hey, Flint? What time is it?” Quarry asked.

I dragged my eyes away from her in order to answer his question, but as I looked at my wrist, I had no answer at all.

“Here,” she said as she pulled my watch from her pocket.

Quarry howled with laughter, and Ash chewed on her bottom lip.

“Explain,” I demanded, wrapping my watch back around my wrist and shoving my wallet in the front pocket of my hoodie.

Quarry filled in the blank. “She’s a pickpocket, dude. You should have seen her when she fell on your lap. It was so fucking fast. She straight-up stole that shit from you, and you had no fucking clue.”

“I didn’t steal it! I was gonna give it back,” she amended uncomfortably. “It was just a joke.”

And just like that, I remembered why I didn’t laugh anymore.

“Was it funny? Stealing from the cripple? You get a good laugh out of that?” I snapped, spinning and rolling myself away. “You know, maybe my judgment of you wasn’t all that off to begin with. Like father, like daughter, I guess.” It was a low blow, but I felt completely betrayed by a woman I didn’t even know.

“Flint, wait. I wasn’t picking on the cripple!”

I fully realized that I had just used the term, but it enraged me that she’d had the audacity to repeat it back to me. Who the hell was this chick? I pushed a hand into my pocket, searching for my keys. Fuck the food. I’d leave her ass there. Hell, Quarry too if he didn’t get his ass to the car.

“Get in the car, Q!” I yelled, only to close my eyes and drop my chin to my chest when my hand never made contact on the keys. “Son of a bitch,” I said as I spun back around.

Quarry was laughing next to her, but Ash’s cheeks were bright red.

“Keys.” I snapped my fingers and opened my hand, palm up.

“Stop being a dick,” Quarry said, casually tossing an arm around Ash’s shoulders.

She didn’t budge as she held my glare.

“Keys,” I repeated, but she remained still.

“It was a joke.” Her chin began to quiver.

For fuck’s sake, I wasn’t in any kind of mood to deal with bullshit from some girl I didn’t even know and was quickly discovering I didn’t care to know, either.

Quarry’s eyes grew wide as she turned to him and buried her cries in his chest.

What the fuck, asshole! Q signed before rubbing his hands over her back.

Her shoulders shook as she let out a loud sob that shocked us both.

“Come on. Let’s sit down.” Q tried to guide her over to an empty table.

Ash refused to look up and tripped over one of the chairs.

“Shit,” Q said, catching her around the waist.

I was just about to roll my eyes when she glanced my way. He was still trying to get her back on her feet and over to a table when her tear-free, bright-blue eyes pointedly glanced in my direction. My head snapped back in surprise, but a smile grew on her face.

Ash was about to put on a show, and with that one look, she had invited me to have a front-row seat.

As she floundered all over Quarry, her hands slid between his pockets and her own. Every noise she made and each time she flailed covered up a jarring movement. She was keeping his mind too busy for it to process all the places she was touching him. Hell, I was only watching her and I could barely keep up.

There was no denying that it was entertaining, but I wasn’t willing to show her that. However, as she accidentally lifted her knee, catching Q in the balls, a laugh erupted from my throat. He cupped his crotch while she apologized profusely and pushed him toward the same chair he’d been dragging her to only seconds before. Just before he sat, Ash swung her arm out, unwinding Q’s belt from around his body before tossing it at me.

“Oh God. I’m so sorry!” she said as Quarry held a finger up to ask for a second to recover. She didn’t wait at all though. Instead, she walked over in my direction; her prideful smile grew with every step.

She pulled my keys out of her pocket and dropped them into my lap. They were quickly followed by Quarry’s phone, wallet, and house keys. Then she snagged his belt off the floor and tossed it over her shoulder.

“It had absolutely nothing to do with you being in a wheelchair. It was a joke and it wasn’t supposed to piss you off.”

“Hey!” Quarry yelled. “That was messed up. You did not have to knee me in the balls to prove a point to him.”

“Oh, that wasn’t to prove a point. That was for bullshitting me. You knew good and damn well that he wouldn’t find it funny,” she said without ever tearing her gaze from mine. “Look, I’m sorry. I don’t have a lot of friends. And I’ve mentally noted that pickpocketing might not be the best way to make new ones.” She shrugged. “Consider it a lesson learned.”

“Three burgers all the way, onion rings, and a shake?” the guy at the counter called out.

Ash arched an eyebrow. “You want it to go, or are we good?”

I didn’t have to drop my attitude. Sure, she’d apologized, but while I might have had a short fuse, I also had a hell of a long burn. However, as she stood in front of me with her arms crossed over her chest and her blue eyes pleading for forgiveness, it magically fell away.

“You sure?” She leaned in, eyeing me warily, but her smile began to grow.

I swear to God it pulled at my lips as well. I fought it. But the harder I tried to keep it restrained, the bigger Ash’s grew. She was stealing my smile. The chick was good! Finally, with an eye roll, I let out a quiet chuckle, which seemed to appease her.

“Good. Now, help your brother get redressed and I’ll make the fancy sauce.” She waggled her eyebrows.

Haven’t read this series yet? Meet Flint Quarry, Till & Eliza

Born and raised in Savannah, Georgia, Aly Martinez is a stay-at-home mom to four crazy kids under the age of five, including a set of twins. Currently living in South Carolina, she passes what little free time she has reading anything and everything she can get her hands on, preferably with a glass of wine at her side.

After some encouragement from her friends, Aly decided to add “Author” to her ever-growing list of job titles. Five books later, she shows no signs of slowing. So grab a glass of Chardonnay, or a bottle if you’re hanging out with Aly, and join her aboard the crazy train she calls life.