Title: Be My Temptation

Series: Book 2 of The Crawford Brothers (can be read as a standalone).

Ashlyn Hart was done with men, or at least those outside of her books. After stupidly falling for the charms of her cheating ex and having her heart broken yet again, she decided to create a new life. One that involved a career change, a new wardrobe, and the possibility of moving abroad. There was just one hurdle: the confident, stubborn and insanely-tempting Josh Crawford.

Josh Crawford hid behind the cliché bachelor lifestyle and a never-ending parade of women. He knew the game and played it well, but the night he tasted perfection four years ago never left him. Back then, he made a spur of the moment decision, one that he has battled with ever since. But beneath the playboy façade was a yearning that wouldn’t disappear. A craving for the only woman who could bring him to his knees: Ashlyn Hart.

Two weeks changes everything.
One night unravels the deepest of desires.
A simple taste unleashes memories that can’t be tamed.

When the girl who dreams of a happily ever after collides with the guy who lives the ultimate cliffhanger, what ending awaits them? Will fear overshadow love? Will the past play hindrance to the future, or will temptation conquer it all? 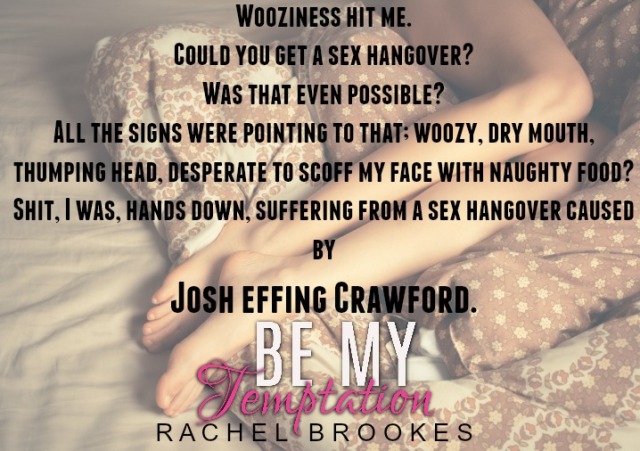 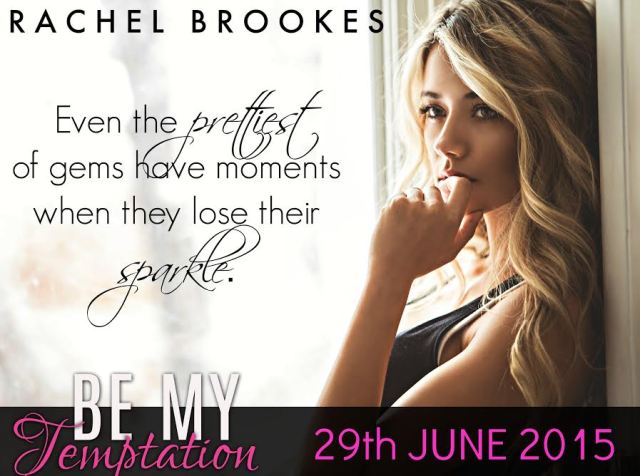 Rachel Brookes is the author of The Breathe Series and The Crawford Brothers and lives on the east coast of Australia where beaches, kangaroos and surfers roam free. She spends her days writing stories that contain a dash of drama, a cup of romance, a spoonful of sexiness and delicious men to season. She is crazy for The Walking Dead, a fan of long island iced teas, a cupcake creator and a lover of book boyfriends. Rachel sometimes forgets to eat, sleep has become non-existent and more often than not she can’t remember the last time she cleaned her apartment, but she wouldn’t have it any other way. When she steps away from her laptop, you’ll find her reading, people watching, taking photos and planning her next big adventure.

She is also obsessed with social media, so come say hi.

2 thoughts on “Releasing Now: Be My Temptation by Rachel Brookes”

Spending the day drinking all the coffee and catching up with all the book boyfriends. (Peter Kavinsky’s up first! 😍) #bingewatch #livingmybestlife #withallthebookboyfriends #lovestories
Nothing says it’s #oscarnight like an elastic waistband and a hoodie stuffed with gummy bears. This is real glamour y’all, and I am here for it. #oscars2020 #awardshowjunkie #livingmybestlife #allthelivelongday #hotmessexpress
Happy 3rd birthday to the cutest little nugget this world ever did see. I love my Wucas! #HappyBirthdayLucas #pieface #babyshark #cutestlittlenugget
Because when you have the chance to get donuts, you get the damn donuts. 🍩 #itsarule #livingmybestlife #withduckdonuts #livingthedonutlife
Good news y’all, my love of personal growth books (and the F word 😂) is still going strong into 2020. Let’s do this. #keepgrowing #letsdothis #livingmybestlife #withallthebooks #booklove
Pajamas, wine, a charcuterie board I made myself, my bestie, and Netflix. This is New Years Eve at 28 and I ain’t mad about it. Not one little bit. #happynewyear #livingmybestlife #hello2020
It’s time for another episode of “Megan attempting things that are clearly designed for children.” 😂 (Not captured on video is my 5 minute attempt at getting out of the foam zone.) #livingmybestlife #atskyzone #nailedit #winterbreakshenanigans
Master’s degree.....✅ "Did everyone see that? Because I will not be doing it again." 😂 #mastersdegree #graduation #gradschoolisover #livingmybestlife
When in Cleveland...#achristmasstory #youllshootyoureyeout #derangedeasterbunny #leglamp #livingmybestlife #allthelivelongday