Conflagration is the second in an Explosive spin-off series called The Wellingtons.

Can be read as a standalone

Branson Wellington? The name, my name, is usually followed by arrogant prick or self-serving bastard, and I can’t say I haven’t earned those titles. It’s true. I’m not the good guy. I’m not the boy next door. I’m definitely not your Prince fucking Charming. Not even close.

And I never wanted to be. Until her. The day I pulled her from the wreckage was the day that my life changed.

Who would have thought that one little lie had the power to throw two lives off course?
Love has never been in the cards for me, but now that she’s here, I have no idea how I’m ever going to let her go. Even if I don’t deserve her.

Because like I said, I’m a self-serving bastard and some things never change. 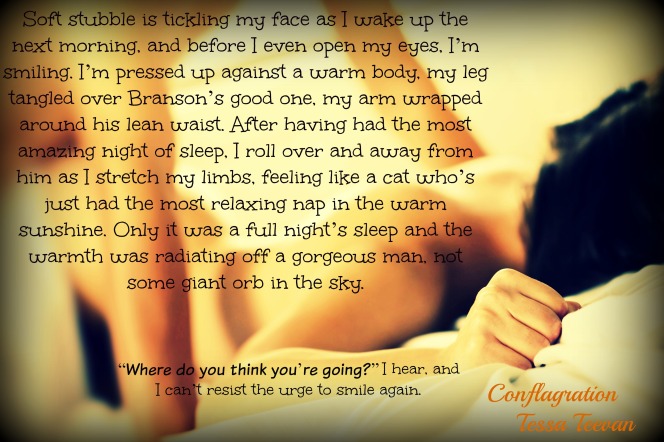 The first time I met Branson Wellington in Incinerate, I wanted to punch him in the face. Hard.

When I met him again in Inflame, I still kind of wanted to punch him in the face, but I knew then that he was growing on me little by little. After reading Combust, I knew that I had to know more about him as soon as humanly possible, because more and more he was winning me and my heart over.

And those weren’t even the books about him.

By the end of Conflagration I still kind of wanted to punch him in the face, but then I wanted to hug his stubborn butt so hard. He won me over. He sold me on him.

Bottom line: I love me some Branson Wellington something fierce, and Conflagration just reiterated that fact immensely.

Conflagration is Branson’s story. It’s his chance at redemption. It’s his chance at having it all. His story is not an easy one. He has gone to hell and back, and he’s got a not so stellar past hovering closely behind him, but I guarantee that everything you think you know about him is wrong.

Branson Wellington will prove you wrong in this book. And Ari, the main girl of the hour? Be prepared to love her so hard you won’t be jealous one bit about the fact that she’s the one Branson Wellington chooses to finally risk it all for.

What was out of this world about Conflagration:

Tessa Teevan’s continues to blow me away more and more with each new release. Conflagration exemplifies all you can expect from her books: they are brimming with love, bursting with heat, and filled to the brim with uniquely phenomenal characters and stories that will instantly win you over immensely.

Conflagration was the book I was waiting. This book is Branson Wellington’s time to shine, and boy does he shine brightly. His story along with Ari’s is one I instantly connected with, and instantly fought like hell for. I cannot rave enough about this book, these two dynamic characters, and their page turning and emotion and heat filled story.

I don’t have the right amount of words for what Ari and Branson have and how beautiful and powerful that is, but I will say that what they have together is built on many things, but at its core it’s built on the idea that love has the power to change you if you let it.

Conflagration is about one Branson Wellington not giving up. It’s also about one Ariana Covington believing those same words, and practicing what she preaches.

Give this wonderfully flawed man and his fierce lady a chance, and you’ll be oh so happy you did. Their love will revive your faith in the power of love. Their story together is the one you’ve been waiting for, so do yourself a favor and don’t wait to read it.

As the blackness starts to fade away, I see that white light, but it doesn’t really look like that tunnel. No, it’s just a scene change, and if I could muster up enough strength, I’d groan because there are things in my life I’d rather not relive. It’s bad enough that I have the memories and have been dealing with the fallout for far too long. Reliving it all over again is more agonizing than the first time around, because now, I know the truth. I betrayed my brother in the worst possible way when he’d done nothing wrong, but by the time I found out, it was far too late.

So why am I having these flashbacks playing in slow motion? I thought when you were on death’s door, your life was supposed to flash before your eyes. So why am I replaying every single mistake I’ve ever made as if it were the first time—in slow motion instead of quick bursts? Maybe my life did flash before my eyes and it happened so fast that I missed it. Maybe I’m dead after all and this? This is my hell.

I’m a twenty something book junkie who is also obsessed with sports. Bengals, Buckeyes, Reds are my teams! I work for the government during the day, hang out with Air National Guard on the weekends, and have been married to my own book boyfriend for over seven years. We currently live right outside of Dayton, OH with our two cats.

If I’m not writing or looking through tons of photos of hot men, all in the name of research, then you can probably find me curled up with my Kindle, ignoring the rest of the world. I love my sports almost as much as I love my books. My other obsessions include red wine, hot men, country music, and all things Grace Potter.

Connect with the Author